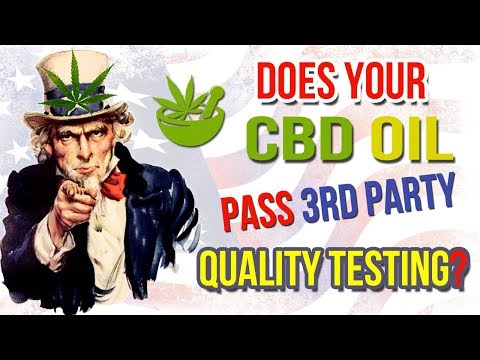 Does Your CBD Oil Passed 3rd Party Quality Testing? – s
Person 1: “This will take care of your arthritic and inflammatory problems, as well as your anxiety and stress.”

Person 2: “Like I used CBD for a good while and it’s pretty good.”

Reporter 1: But what are you really getting when buying CBD. Fox 11 is going under cover where purchasing CBD at different location across Los Angeles. Were teaming up with Dr. Oz to have it professionally tested with startling results.

Dr. Oz: We will able to find that there’s no microbial contamination.

Dr. Pedram Salimpour: This is just a wild wild west that really is.

Reporter 2: This investigation is gonna be eye opening because it’s gonna give us a glimpse into an industry with little regulation. I’m excited to partner with Fox 11, Fox LA to pull back the curtain on what you could be really getting when you purchased CBD Products.

Reporter 1: CBD or Cannabidiol is one of the most prominent components of the hemp plant. Unlike marijuana CBD has little or no THC. The psychoactive part of the plant that gets you high. Proponents say CBD has all the benefits of medical marijuana without the intoxicating side effects. Able to help with Pain, Anxiety, Insomnia, Epilepsy even Cancer & Heart Disease. Sales have been exploding but there is almost no government regulation which can open consumers up to the unknown.

Reporter 2: This country when we buy something we expect to get what we pay for.

Reporter 1: That’s why Dr. Oz is joining forces with Fox 11 his team purchased several different CBD Products in New Jersey to test. At the same time our Fox 11 under cover photographer and I went to a variety of locations here in our viewing area. As we played the part of interested buyers we stop by several stores selling CBD. All of which advertised major healthy benefits for the product.

Team: Let me try that and I’ll get the piece things.

Reporter 1: We purchased a mix of CBD infused goods ranging from edibles to creams and liquids.

Team: Okay so we’ve now gone around to several different locations and we got a bag full of different CBD products right here. I’m gonna take all of this everything we bought today were going to take it up to the lab for testing.

Reporter 1: After a quick drive up t Chatsworth we arrived at Nascient, a premium cannabis testing lab. We delivered our CBD Products to their team and the lab begins processing them for testing with the samples Dr. Oz’s team bought. In less than 24 hours later all of the results are in.

Reporter 1: Pediatrician Dr. Pedram Salimpour in Nascient and COO Dr. Leah Shaffer reviewed all of the testing results with Fox 11. When it comes to CBD Levels, five of the samples had a rating of ND meaning No CBD was detected despite claims on the labeling.

Dr. Oz: If you have a consumer that’s trying to take it medicinally then you know it’s basically snake oil.

Reporter 1: Out of all the samples tested only 1 product had what it claimed, 2 others were close, 5 products had no CBD detected, 4 products had significantly less CBD and 1 product had more CBD. And some of the products had major health concerns, one of them was this CBD lemonade shot we bought in Hollywood. Testing showed it contains no CBD but it did test positive for abnormally high level of Ethanol. This CBD gummy bears purchased by the Dr. Oz team also tested positive for high levels of Ethanol. But it was these CBD Gel Caps brought into the lab by a concerned customer that had the most startling results. They did have CBD in them but they also tested positive for a strain of E. Coli that produces the deadly bacteria known as Shiga toxin.

Dr. Oz: Not only as the consumer not getting any medicinal value from it. They’re actually introducing a toxin into their systems.