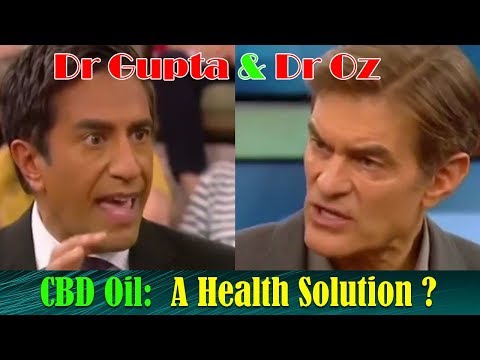 Dr. Sanjay Gupta & Dr Oz | CBD Oil: A Health Solution? – s
Dr Oz and Dr Sanjay Gupta discuss the latest research behind CBD. Dr Gupta says,”The cannabis plant has lots of different ingredients, but the 2 primary ones is THC, psychoactive component that gets people high and there is CBD which is cannabidiol which doesn’t cause a psychoactive component reaction it is believed to be medicine and it’s been used as a medicine in decades past an it is now BOOMING now the President Trump has legalized it at the state level.

We’ve talked about medical marijuana in the past.This is NOT that,right?CBD Oil is being sold all over the place.”Yes, you take the plant and you can pull out certain components of it.So, in this case, you’re JUST pulling out the CBD component. You are just using that.Therefore you’re NOT getting all those other effects that people associate with marijuana. This is why it is Now legal in50 states.

This is interesting how the medical community was using CBD in the last 5 years.Nobody was really talking about it.You had a medication that was a known ‘Charlotte’s Web’ for a little girl who had seizures that just could not be treated by numerous medicines.It took her Mom who started taking CBD herself in her kitchen sink and giving it to her daughter that is what was known as Charlotte’s Web.Within five years it’s gone from being that idea to nowFDA-approved. That is FAST!Never before has the government approved a medicine as fast as CBD Oil. CBD Oil for one is that it is from the plant. This ISN’T SYNTHESIZED in some LAB. This is CBD that is actually coming directly from the plant itself,from the botanical!

…The federal government says it is not legal.YET,Now 50 states say IT IS!Kids with seizures are being treated. Let me say,the states say Yes, we’ll approve it but still federal level it’s illegal.

What’s starting to gain more traction, I think really is what’s happening with opioids in this country. What they found, Dr. Oz was that in several states that HAD approved CBD Legislation, they saw that their opioid prescriptions started to go down.So,that’s an area the medical community is really focused on.

As a neurosurgeon, you’re good at this stuff. Explain to me how CBD actually affects the body. “Well, we have these different receptors in our bodies to basically attract and to have these components activated but because those receptors are everywhere in our body, you could get an impact just about anywhere. CBD seems to seek out the receptors in the area of most need.

CBD produces so many effects throughout the body based on the fact it can bind to receptors in so many of our different organs. Right, places as far away as the intestinal tract.And your spinal column, if up into your brain and that’s why people say it helps them alleviate pain. Right, maybe helps with seizures. It’s a pretty serious problem for a lot of folks. Anxiety, pretty common problem that we don’t want to treat with withdrawal medications if we don’t have to.

Now,CBD oil that is in there and touching the receptors in so many parts of our body. I love your thought that we evolved in a species because we had access to these natural plants and they understandably can affect this.”
“That’s right. And we and the receptor started to evolve in our body as well. We even started making our own form of CBD in our body. But, sometimes it’s not enough. So you take supplements.

These products are popping up everywhere. From gummies,muscles soothing creams, even things for your pet’s health.

“It’s the wild wild west it’s completely unregulated.”So you must do your investigation to see the Lab Reports test results as to how much CBD is actually in these products. This you can see on Hempworx website under the Documentation Link . This CBD oil BOOM! It’s now a 1 billion with a B billion dollar industry and CBD sales are expected to grow 700 % in the next two years! I mean that’s shocking the opponents say CBD can be used to treat everything from anxiety, chronic pain to epileptic seizures, even cancer.

Dr. Oz stated that “Rarely have I been called by as many people saying it’s helpful.”