Home Cannabis Benefits How Is Delta 8 THC Made? 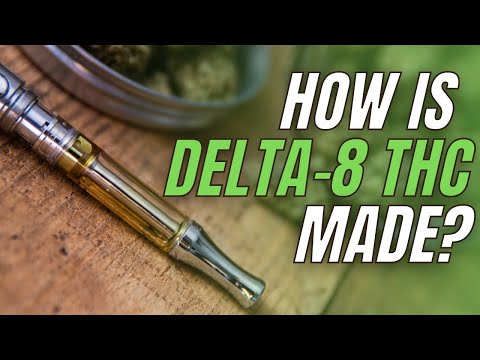 In this video, we break down how Delta-8 THC is made! Delta-8-Tetrahydrocannabinol (Delta-8) is a naturally occurring cannabinoid, but one now more commonly produced in a laboratory. This newfound ‘legal’ high is the latest cannabinoid to get the cannabidiol (CBD) treatment. That means unstoppable consumer demand, which has thus far evaded federal regulation.

But where is this novel cannabinoid coming from? It’s thanks to a surplus of other, more prevalent cannabinoids. Hemp-derived Delta-8 is jumping through legal loopholes and semantics, and it’s also relatively cheap to produce in a lab. It’s a matter of tinkering with the molecular structure of more benign and plentiful cannabinoids to convert them into Delta-8.

All cannabinoids begin their life as cannabigerolic acid (CBGA). Called the mother of all cannabinoids, this compound evolves throughout the course of the plant’s growth cycle into every natural cannabinoid known today, from THC to CBD and beyond. Genetics, environmental exposures, and stress can all influence these biological conversions.

Because cannabinoids are remarkably similar in molecular structure, bringing this natural tendency to convert from one to another into the laboratory is relatively straightforward. Long before Delta-8 rose in prominence, lab technicians have been using similar conversion techniques to transform common cannabinoids into rare, exotic ones. Now they are applying this same technology to Delta-8.

Delta-8 exists in many cannabis cultivars but typically in extremely low quantities. To extract and purify Delta-8 from raw plant material with less than one percent of the targeted cannabinoid is unprofitable. This is why producers have begun converting other, more prevalent cannabinoids like cannabidiol (CBD) and tetrahydrocannabinol (Delta-9 or, more commonly, THC) Delta-8. But this isn’t the only reason for the rise in production of Delta-8.

Another reason is thanks to the booming CBD industry. With a surplus of CBD now flooding the markets, producers have found themselves not only with excess CBD but excess Delta-9 as well, thanks to the THC remediation processes. Both CBD and Delta-9 are prime candidates for conversion into Delta-8. Delta-8 is more profitable than CBD these days. Plus, it falls into a legal loophole and avoids the same persecution that its sister, Delta-9, receives.